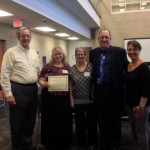 Patricia Maldonado was announced as the 2013 Kymberly Jane Harris Endowed Scholar in Long Term Care Administration on April 8 at the School of Aging Studies, University of South Florida. The scholarship was established by the family of Kym Harris in her memory following her untimely death in 2007. Kym Harris was the much beloved nursing home administrator at FPH and a Masters student in Gerontology at USF when she died. She had graduated many years earlier from the Bachelors program in Long Term Care Administration at USF, and was back in school to update her knowledge in order to better serve her residents. Kym was a model of what USF hopes all of its Long Term Care Administrators will become – a compassionate, caring, and capable administrator who understands that the nursing home is first, and foremost, home for all of the residents living there.

When Kym’s family generously endowed a scholarship in her memory, the faculty decided to select one student each year who most exemplified the high standards of nursing home administration set by Kymberly Harris. Patricia is a junior from Lutz, Florida.