Joe Xanthopoulos, CEO of Florida Presbyterian Homes (FPH) in Lakeland, Florida, has agreed to participate in a friendly football wager with fellow administrator and colleague Dan Rexroth, CEO of John Knox Village in Lee’s Summit, Missouri. The wager is centered around the Bucs vs. the Chiefs in Super Bowl LV scheduled for Sunday, Feb. 7, 2021 in Tampa, FL. 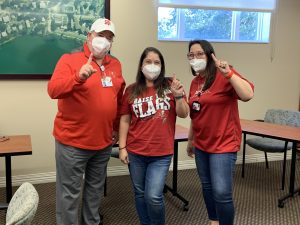 Here are the terms of the friendly wager: “If the Bucs win on Sunday,” said Xanthopoulos, “my friend Dan must wear a Tom Brady Buccaneers jersey for one full week following the Super Bowl. This will let the residents and staff at John Knox Village know who the champions really are.” If, however, the Chiefs win the game, Xanthopoulos said he would have to wear a Patrick Mahomes Chiefs jersey for the week. “I really don’t want to do that, but a bet is a bet,” added Xanthopoulos. Both men have agreed to the wager and recorded a video announcement featured on their company’s Facebook page and on YouTube here.

Super Bowl LV determines the league champion for the 2020 NFL season. The local favorite and National Football Conference champion, Tampa Bay Buccaneers, led by quarterback Tom Brady, will host the American Football Conference champion Kansas City Chiefs, led by Patrick Mahomes. The Chiefs won last year’s Super Bowl matchup against the San Francisco 49ers, however, this will be Tom Brady’s 10th appearance in a Super Bowl, having won six of those victories and receiving an MVP award in four. Since the Buccaneers are located in Tampa and the Super Bowl is being played there, this will be the first time an NFL team has played a Super Bowl in their own home stadium.

“We love our Bucs and we’re ready to ‘fire the cannons’ for a win,” said Xanthopoulos. “I hope Dan is prepared to wear Tom Brady’s No. 12 jersey all week long. He’ll do us proud keeping the Bucs spirit alive and well in Missouri.” 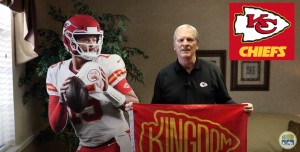 Xanthopoulos and Rexroth have been friends for over 20 years during their career. The two agreed to the friendly wager as an opportunity to build camaraderie between their two organizations from competing Super Bowl cities. “Dan is a great guy and we’re having some competitive fun in relation to the big Super Bowl game,” said Xanthopoulos. “Our residents and staff have truly embraced the challenge by decorating with Bucs accessories and wearing Bucs attire to show support of our local team. We’re just really looking forward to this win.”