Recently, we learned about an important study found in the Journal of the American Medical Association (JAMA). This study showed that a sedentary lifestyle was worse than smoking, diabetes and heart disease. A senior author of the study, Cleveland Clinic cardiologist Dr. Wael Jaber, said, “being unfit on a treadmill or in an exercise stress test, has a worse prognosis, as far as death, than being hypertensive, diabetic or being a current smoker.” 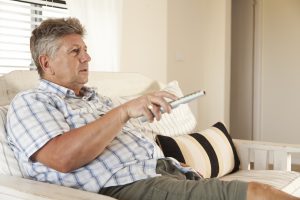 This is important to know as we age, especially when some seniors think physical activity isn’t as important as it was when they were young. Dr. Jaber said he has never seen research as pronounced and as objective as this. The study essentially proves that being sedentary, also known as unfit, should be considered as strong of a risk factor as hypertension, diabetes and smoking, if not stronger than all of them.

When looking at the risk of death, a sedentary lifestyle or being unfit, was worse than the other risk factors such as smoking or end stage disease. In fact, the researchers report compared the risk of sitting against high performers on a treadmill test and found that the mortality risk of a sedentary lifestyle is three times greater than smoking. THREE TIMES GREATER!

What does this study tell Americans? We need to get up and move more. Being sedentary is bad for your health!