We are now beginning 2015 and will be celebrating our 60th or Diamond Anniversary of Florida Presbyterian Homes this year. Residents who are presently serving on the History/Archives Committee have been editing the 2005 articles and adding what happened to those buildings in the last ten years since the original articles were written.

Some buildings are still here and some are gone but these buildings are all a part of our history that started in 1955. History/Archives members that participated in this project are: Gloria Winders, Charlotte Paff, Alon Stevens, Marcia Hudson, and AnnaBelle Allyn. La Donna Scruggs and Ellen Settle have been great supporters with creating albums and organizing paperwork. 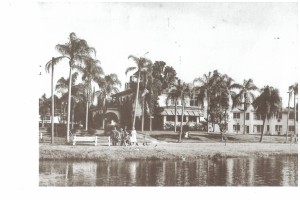 The Watson House was a fine old mansion with six bedrooms, six fireplaces, and six bathrooms. On September 1, 1955, the house was opened and soon named Howland-DeLay, honoring Mr. Howland and in memory of Miss DeLay. Mr. Howland was one of the first residents at Florida Presbyterian Homes.

The Howland DeLay Annex was built as a separate building in September 1958. It contained twelve apartments and limited nursing facilities.

In 1963 a health center was added and dedicated in February as the Monte Johnson Health Center.

In 1993 the first floor apartments of the Health Center were named in memory of Rev. Robert O. Garden and in honor his wife, Margaret Melissa Strunk Garden. The Gardens became residents of Florida Presbyterian Homes in 1978. Rev. Garden had served 52 years as a pastor in churches in Tennessee, Iowa, Illinois, and Kentucky.

After Rev. Garden’s death in 1992, his daughter, Constance Wilkes, generously donated funds to Florida Presbyterian Homes for unrestricted use.

In 2013 the interior part of the first floor of the Howland-DeLay Annex was reconfigured and made into the Executive Office. John Hehn, Executive Director, Maria Rivera, Administrator, and Patty Fekete, Finance Director, all have offices surrounding the entrance room where Barbara Collins, Executive Assistant, works and tries to keep them all in line.

On the second floor of the HowlandDeLay Annex there was an Assisted Living Clinic, the Sun Room, the nurses’ station, and more apartments. In 2013 the apartments were updated and renovated. The Assisted Living nurses’ station was moved to the New Assisted Living Facility. The Sun Room still functions as a center for resident activities and includes a jigsaw puzzle table, television, microwave, and coffee maker. It has always been hard to tell where Howland-DeLay ends and Monte Johnson Manor begins.

There are photographs of Mr. Howland and Miss DeLay on the wall of the first floor hallway of Forrer-Bunker. There is a painting of the Watson House in the entrance room of the new Executive Office.