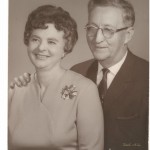 September marks the 60th anniversary of Florida Presbyterian Homes. This is a most appropriate time to remember the life of our founder, Monte Johnson.

William Monte Johnson was the son of Alex and Laura Johnson. He was one of ten children, born in the mountain town of Crossnore, North Carolina, on April Fool’s Day in 1903. Monte never had the privilege to see a doctor or a teacher until the age of nine, when two came to Crossnore and made an amazing impact on his life. As a young boy, he was crippled and had to crawl for a long time; he may have suffered from polio. One leg was shorter than the other. Years later, he could climb a mountain faster than anyone; it was impossible to keep up with Monte and his walking stick. This gave him the nickname “The Mountain Goat.”

During his high school years, Monte attended Berea Academy in Kentucky; then went on to graduate from Berea College with a bachelor’s degree in education on June 8, 1925. Monte met Lucile Herman (born December 24, 1904) at Berea College, and they were married in North Carolina on August 31, 1925. They honeymooned in Lakeland, and liked the area so much that they stayed until December. They returned when Monte obtained a teaching position at a North Carolina elementary school for three years, and became principal toward the end of that time. Lucile taught first grade at the same school.

Johnson had a long-time wish to serve as a missionary in Puerto Rico. Soon he entered the Presbyterian Theological Seminary in Louisville, Kentucky, in 1928. It was while he studied at the seminary that he felt a calling toward the ministry of the church rather than the mission field, and he received his first charge, a little church called Whites Chapel, in Whites Station, Kentucky.

The first year after he graduated from seminary, Mount Vernon, Kentucky, became home. Johnson was the pastor for a small church at a mission school for girls, and at another little church in Richmond, Kentucky. All the while he was still traveling to Whites Chapel – often all in the same day.

The Johnsons remained in Kentucky until they came to Lake Alfred in 1938 to live permanently in Florida. By this time they had four children: Theresa, William, Anna, and Mary Beth. He was pastor of the First Presbyterian Church of Lake Alfred for eight years, and then moved on to Lakeland to become pastor of Westminster United Presbyterian Church on Florida Avenue in 1946.

During this time, Lucile returned to college, graduating from Florida Southern College with a bachelor’s degree in education. At the same time, Monte was awarded an honorary Doctor of Divinity degree from Berea College. Dr. Ludd Spivey, then president of Florida Southern College, graciously sent Lucile’s degree to Berea so the Johnsons could receive their degrees together.

In 1953, Monte realized the need for a retirement home with a Christian atmosphere. Two members of his congregation, who lived in Lakeland’s Terrace Hotel, agreed. They set their plan in motion. Erwin Howland, Larimore and Alma Denise, and Monte and Lucile Johnson explored a number of places with potential, finally discovering a lovely old mansion at 6 Lake Hunter Drive. Johnson proclaimed that it had “six rooms, six fireplaces, and six bathrooms!” The Synod of Florida of the United Presbyterian Church in the USA approved the purchase of this property, and in a meeting on June 22, 1955, set up a corporation to hold the property and administer its development.

Dr. Johnson was named chairman and Dr. Denise, Secretary-Treasurer. The Howland-Delay House (its’ appropriate new name) was opened September 1, 1955, with Mr. and Mrs. Wilmer Smith in charge, and with two guests, Mr. and Mrs. Hans Reid. On November 23, 1955, Monte Johnson left the Westminster congregation to work full time, continuing to establish the FL United Presbyterian Homes in Lakeland. Soon, other residents arrived and the family grew.

The Johnsons moved into the Munn House where they lived for one year while preparing the grounds for Terrace Gardens.

In April of 1956, Monte Johnson began Lakeland’s first drive-in church. The first service was held at the Lakeland Drive-in Theater, on South Florida Avenue at the corner of Highland Drive. The service was conducted from the top of the projection booth: Monte Johnson, the organ, and organist Cora Randall (resident Charlotte Paff’s sister); 350 people attended.

Monte and Lucile Johnson co-authored the 1975 history of the Homes: “Sinners Came, Saints Followed,” telling their story in their own words. Copies are available for loan in the library and history archives room.

Because Monte came from such a large family, he was always concerned about those who were alone when they were sick or needed help. If a neighbor was ill, he would visit and help, even do their dishes. If a staff member did not have transportation to work, Monte would go to their home and pick them up.

Monte Johnson’s life ended abruptly on April 19, 1984, at the age of 81. He suffered a heart attack at noon in Neumann Dining Room, on the very spot where the Homes began its operations in 1955. Although he had been sick for several days, he insisted on being with his friends for the Sunday meal. A memorial service was held at Westminster United Presbyterian Church. Burial was in Crossnore, North Carolina, the place of his birth.

Throughout Monte’s career, Lucile was the helpmate at his side. She and Monte were married for 50 years, and had ten grandchildren. Lucile continued to live at Florida Presbyterian Homes, at 10 Terrace Gardens. In 1986, she married Stuart Mills, a widower who was a neighbor. Lucile died on August 15, 1999.

Monte and Lucile’s daughter, Anna Johnson Busing, and her husband Dick, are current residents of Florida Presbyterian Homes. Lovely portraits of Monte and Lucile Johnson hang on the walls in the history room.