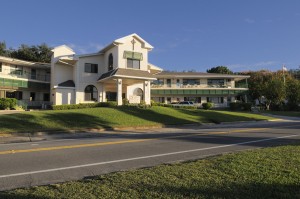 Dr. Samuel H. Forrer’s ancestors came from Switzerland in 1754 and prospered in the new world, establishing a large plantation in Luray, Virginia. Samuel Forrer, offspring of this wealthy family, became a Presbyterian minister. He served in Detroit for many years.

One summer, when Dr. Forrer and his wife, Louise, were in Chautauqua, New York, they met Dr. Larimore C. Denise, who was instrumental in starting Florida Presbyterian Homes. Dr. Denise invited them to visit. They accepted his invitation and stayed at the Howland-DeLay House. They liked what they found; and when they retired to Lakeland they built a home for themselves at the southwest corner of Lakeside Avenue and Cresap Street. It eventually became the Denise Executive Building. Dr. Forrer gave a generous monetary gift from the Forrer Benevolences in honor of his wife, Louise.

Mr. John Bunker, a sugar broker from Chicago, retired to Lakeland with his wife. When his wife died, he was offered a room in the Howland-Delay House where he lived many years. He expressed his desire to get rid of the millions he had accumulated in the sugar business and our founders, Monte and Lucile Johnson, accommodated him. Shortly before he died he gave $100,000 to Florida Presbyterian Homes for an apartment building to be named in memory of his wife, Elizabeth. He gave another $100,000 for its maintenance, and requested that some of the money be set aside for people with limited means.

After the construction of the new apartment building, Dr. Forrer and Mr. Bunker requested that it be named for their wives. Brass plates with those names were placed to the left and right of the entrance. The brass plates are still there.

At the dedication ceremony, Dr. Forrer received an unexpected gift. It was a mural, 25 feet by 5 feet, of his family homestead in Luray, Virginia. It was created by a group of residents under the leadership of Arch Campbell and called “The Old Plantation”. Dr. Forrer asked that it be put on the north wall of the lounge/dining room in the building, so that in later years he could sit and remember his childhood home. The wall with the mural is still there, but a few feet in front of it is a new wall with a fireplace. The only way to see the mural and original wall would be to look behind the locked doors.

The exterior and interior of Forrer-Bunker have been renovated and reconfigured several times, most recently in 2000. When the dining room and kitchen were created in the Nora Rife building, the dining room in Forrer-Bunker became a lounge; the kitchen became the Administrative Offices. Later, this area became the game room/exercise room and billiard room. The library became the Marketing Office, presently staffed by the dynamic team of Terri Ciminello, Cher Salvator, and Maureen Artalona. A second floor library and solarium overlook the lake and form a central focus.

Today, the Administrative Offices are just inside the main doors to Forrer-Bunker Manor. Here you can find the heart and soul of Florida Presbyterian Homes. Ann Smith, receptionist, and Vickie Irizarry, secretary, warmly greet residents and visitors. Kim Roberts, Human Resources and Office Manager, and Jennifer Olivier, Public Relations Manager, have offices there. Rev. Dr. Barbara Booth-Jarmon has an office nearby. It is a very attractive and welcoming area.