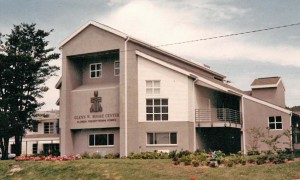 As Florida Presbyterian Homes continued to grow, there was a definite need for a larger place for Christian Seniors to worship together. The residents had been using the Sun Room in Monte Johnson Manor for Sunday morning worship services and the Forrer-Bunker dining room for Sunday evening Vespers.

The view of Florida Presbyterian Homes from across Lake Hunter is dominated by its central building, the Glenn W. Moore Chapel and Center. It is fitting that this should be the visible symbol of a community founded and developed to keep the spirit of Jesus Christ at the center of its life. The seal of the Presbyterian Church (USA) is prominently displayed on the façade of the building. Florida Presbyterian Homes is related to the denomination through the Synod of South Atlantic.

Mr. and Mrs. Harold Marshall’s house and small orange grove once stood on the land now occupied by the Glenn Moore Center. They became residents of the Homes in 1960, and he moved to the Johnson Health Center in 1985, years after his wife died.

The Glenn Moore Center at Florida Presbyterian Homes was built in 1987, and it was named and dedicated on Thanksgiving Day of that year. It was built on the land where the Marshall house once stood. Originally, the building included the Chapel, the office of our Dean of Residents, the music library, guest rooms, beauty salon, and the VOLShop. Presently, the upper level includes the Glenn Moore Chapel, renovated for the third time in November 2013, the office of our Dean of Residents, Etta Owens, the Activities Office staff, a mini-gym, and restrooms. The lower level includes three recently renovated guest rooms, the VOLShop, and the beauty salon.

Glenn and Mary Moore became residents of Florida Presbyterian Homes in August, 1967. They lived in an apartment on the top floor of a three-story house just behind Forrer-Bunker Manor. Glenn was well known throughout the Presbyterian Church in the United States of America (PCUSA) as General Secretary of the General Council, one of the top leadership positions in the denomination. Born in Missoula, Montana, his early service years were in California where he was University Pastor and Executive Presbyter. After holding many positions of national prominence in the Church, he retired and was elected to the Florida Presbyterian Homes Board of Directors, where he served until his death on July 20, 1990. Before his death, he had been made an honorary member of the Board.

The Glenn Moore Chapel continues to be a special gathering place on the campus of Florida Presbyterian Homes. The Sunday morning chapel service is led by Rev. Dr. Barbara Booth-Jarmon. Memorial services are also a special part of her ministry. Sunday evening Vespers are organized by our Spiritual Life committee. Resident Council and Association Meetings, the Academy, Lake Hunter Fellowship Programs and other groups use the Chapel for large gatherings.