Originally, Lakeside Heights was an area of Florida Presbyterian Homes covering Lakeside Court, Lakeside Avenue, and Cresap Street. Before 1959, Lakeside Heights was a citrus grove and the estate of Mr. Herbert J. Drane. The first ten homes were dedicated on February 8, 1959. Soon there were 35 homes. They were built by the Presbyterian Board of Pensions for retired ministers, missionaries, and educators. Some residents built their own houses and gave them to the Board. Now this is choice property on beautiful Lake Hunter. An evening sunset is worth the price of living here. 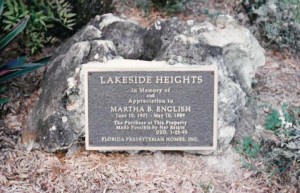 Lakeside Heights began as a separate colony of ministers, educators, and missionaries, people knit together by a common vocation, and often similar college, seminary and mission field backgrounds. The pensioners paid rent to the Board of Pensions based on their ability to pay, and the Pension Board maintained the property. Residents, including Barbara and Maurice Robertson, and Bob and Rowena Tebbe, managed the property.

For a time, the Board of Pensions also owned 40 duplexes in a south Lakeland development called the Villas. They were a “feeder” for residency in Florida Presbyterian Homes.

In recognition of the $1,450,000.00 gift from Mrs. English to purchase the Pension homes, a lighted stone marker and plaque with her name was placed at the corner of Lakeside Avenue and Lakeside Court.

Six houses on Talley Street and one on Kenilworth Place were private homes acquired by Florida Presbyterian Homes at different times. They are now also part of Lakeside Heights.

In 2005, two new houses were added to the 700 block of Lakeside Court. They received new residents immediately. As houses were torn down and replaced, Lakeside Heights took on a new look with a number of updated duplexes and a few houses. In 2013, a larger duplex was built facing Lake Hunter and was soon occupied with new residents.

In 2014, two houses on Lakeside Court were demolished and new construction is under way. Change is a challenge at times, but the Lord has his hand in our growth, so more Christian retirees can join in our fellowship.

Over the years more homes, each full of rich memories, have been and will be replaced by more modern ones. The past will be remembered, yet new traditions will replace old ones. The uniqueness of Florida Presbyterian Homes lies in its people, not its buildings; and from what we see in the new residents coming in, the heritage will not be lost.