Mrs. Lucille Munn lived at 777 Lakeside Avenue in a fine old house with eleven acres of land sloping down to Lake Hunter. It was a wedding gift from her husband, William Munn, in 1914. Mr. Munn had terraced the land to avoid erosion and planted citrus trees, exotic plants and shrubs, and named it “Terrace Gardens.” By 1956 the garden had gone to seed, but the house had been designated a Local Historical Monument, and Mrs. Munn was a widow in her eighties. 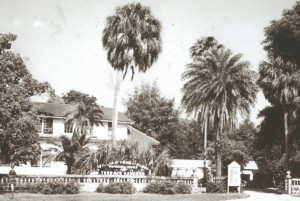 A year later, after a mammoth land-clearing project, ground was broken for the first of 32 homes in Terrace Gardens. Mrs. Munn herself shoveled the first mound of earth saying, “This is the happiest occasion of my life. I am happy that long years after I have passed into the great beyond, thousands of aging Christians may live here and be as happy as I have been.”

The first house was built and dedicated on April 25, 1957, by Dr. James Richard and his wife, Hazel, from Oberlin, Ohio. There was an understanding that they would occupy it for their lifetime and it would then become the property of Florida Presbyterian Homes. By spring 1960 there were 35 homes in Terrace Gardens. Each house had a metal plate indicating the name of the owner. A number of these plates are stored in the cabinet on the first floor hallway of Forrer-Bunker.

Mrs. Munn’s home served for 30 years as a center for group activities, with space on the first floor for 200 people at any one time. It became the community center for the residents of Terrace Gardens, Howland-DeLay, and Lakeside Heights. There were social and religious services, parties, concerts and public meetings as well as a room for the hostess and rooms for guests. In 1986 the Munn House had to be demolished because of extensive termite damage. The ground on which it stood is now occupied by the duplexes on Waverly Place and Waverly Court. Also on the property is the swimming pool and exercise room, appropriately named the “Munn Aquatic Center.”

More houses and duplexes were renovated or replaced over the years to keep Terrace Gardens up to date with the architecture of the day. In 2011 a few more houses were demolished in a large area between Waverly Place and Terrace Gardens Lane. Two triplexes were built on the property and by the end of 2011 all six units were filled with new residents.

Not too long after the new residents had settled into their new homes the rest of the open area had two duplexes built on that land. All four units were filled by the end of 2013.

On a wall of the first floor hallway of Forrer-Bunker there is a lovely portrait of Mrs. Munn along with a newspaper article about the Munn House.