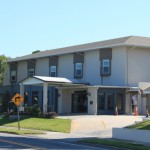 The Nora Rife Building faces the waterfront of Lake Hunter at Cresap Street. Its construction necessitated the demolition of the original Watson House in 1979. The building was designed to provide access to both Howland-Delay and Monte Johnson Manor.

Originally from Michigan, Nora Rife came to Winter Haven, Florida, in 1935, and stayed 60 years, serving her church in many capacities. One of her favorite activities was to travel by car all over Florida, requesting donations from churches and wealthy people to help build the Presbyterian Homes. In 1980, she bought a duplex at 524 West Highland Street and took up residence briefly, but found that her roots in Winter Haven were too deep to leave.

Nora Rife was instrumental in the original interior design and decoration of the building. As leader of the Women’s Auxiliary, she worked hard raising funds to purchase much-needed equipment. Nora Rife served on the Board of Directors for the Homes from 1967 to 1981, and was President of the Board from 1968-1975.

Among her many other legacies, it is notable that she began the first library at Florida Presbyterian Homes, along with Helen Parker. Her portrait is in the lobby of the building that bears her name. When the two-story Nora Rife Building was built in 1980, the first floor included an attractive lobby, the dining room, kitchen, a hostess station, and an elevator.

On the second floor of the original building, ten Assisted Living apartments surrounded Scott Lounge, a central meeting room for the use of the residents. Exercise classes, table activities, and other gatherings took place there. A sink, refrigerator, and microwave made it a multi-purpose room. It was named to honor George Tressler Scott, a former Associate General Secretary to the Board of Foreign Missions, and a resident from 1975 to 1979.

The inside of the kitchen was demolished and extensively remodeled with new appliances and workspace in 2012. Today, the kitchen serves three meals a day, provides food service for the Porter-McGrath Health Center, and take-out meals for those who are unable to come to the dining room. Also, it serves meals for special events, and occasionally sells milk to residents.

Above the dining room, six newly remodeled apartments became available in 2013. These one and two-bedroom apartments are exceptional. They were built to conform to standards of living for both independent and assisted living.