One former building on the southwest corner of Cresap Street and Lakeside Avenue was part of the life of Florida Presbyterian Homes almost from the beginning. Dr. Samuel Forrer and his wife, Louise, built a house in 1956 for their own use. The Forrers would go from their home to the dining room of Howland-Delay for their meals.

Over the years, the house changed hands many times. Its last residents were Dr. and Mrs. John Corbin. Dr. Corbin was a prominent missionary leader of the Presbyterian Church (USA). In the 1990’s, the home was converted into offices and named the Denise Executive Office Building in memory of Larrimore and Alma Denise. 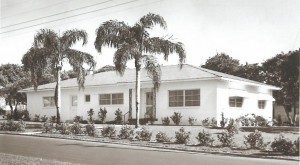 The building was headquarters for the Executive Director, Finance Officer, Director of Development and Marketing, Accounting Department, and their support staff.

The Denise Executive Office Building was demolished in 2010, for the construction of a new Assisted Living Facility.Larrimore C. Denise, President of Presbyterian Theological Seminary in Omaha, Nebraska, from 1924 to 1943, retired to Lakeland in 1952. He bought a house for his family at 300 Patten Heights, joined Westminster Presbyterian Church, and prepared for a quiet retirement with his wife, Alma. But that was not meant to be. The Synod of Florida elected him chairman of its Ministerial Relations Committee and in that capacity he worked with Dr. Monte Johnson, Pastor of Westminster Church, and other pioneers to foster the founding and growth of Florida Presbyterian Homes.

Dr. Denise, Dr. Johnson, and Edwin Howland secured the permission of the Synod of Florida to purchase the Watson House. Dr. Denise suggested Florida Presbyterian Homes as the name for the community. He was also actively engaged in the purchase of the Munn property, and in the development of Lakeside Heights.

Mrs. Denise started the Ladies Auxiliary of FL Presbyterian Homes. The Auxiliary was a major financial and physical influence, developing relationships with Presbyterian churches throughout Florida.

In time, two of the Denise children, Mrs. Dorothy Hagerman and the Rev. Paul Denise, became residents of the Homes. They were delighted to see the executive office building named for their parents on April 24, 1995, during the 40th anniversary year of the Homes.